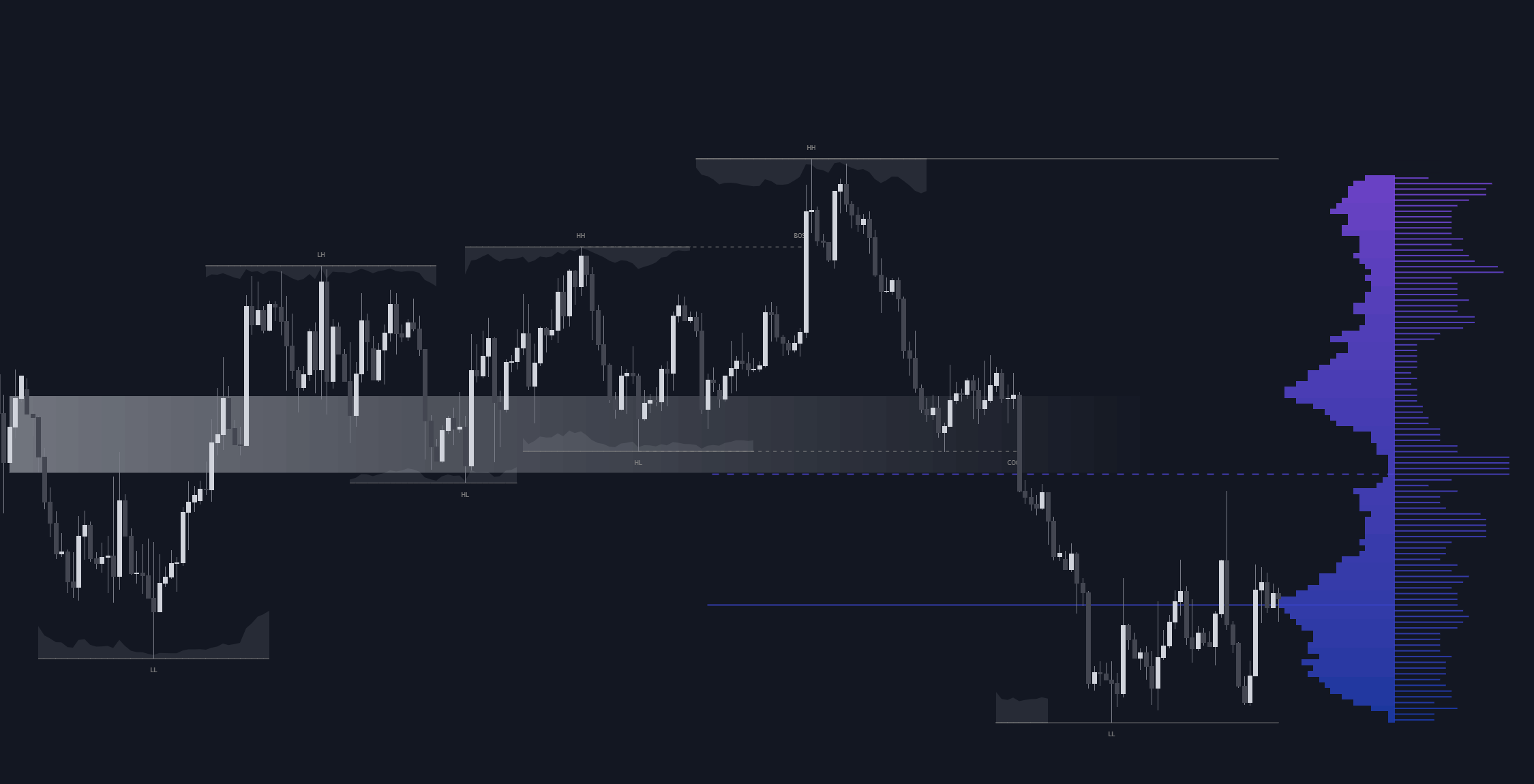 Smart Money Concepts is becoming a more popular term amongst traders, particularly in the Forex community as a more legitimate way of saying "trading with the banks". In this article we break down each component of this and explore how it all works.

The whole idea here is about acknowledging there are smarter players in the market such as institutions, banks, funds, and more who trade in more calculated ways than your typical "retail trader".

Well, this is basically the be all end all for those types of traders.

Let's cover the components of Smart Money Concepts and explain what it's actually all about.

One of the biggest components in SMC is supply and demand.

These are zones on the chart where there is supply (sell orders) and demand (buy orders) assumed to be from smarter players as I mentioned earlier.

You can find these on any chart by looking for areas where price suddenly moved up or down with high momentum and then marking the previous consolidation zone.

Here is an order block of supply, as you can see price reacted strongly to the downside in this area above.

After April on the chart, price came back up and perfectly wicked this supply area before falling further.

This is a perfect example of how you could use a supply zone to place trades & understand where the market is likely to go next.

Ok so we've covered supply, but what about the demand zones?

Same thing, just the opposite way.

You will typically notice price consolidate before a big momentum drive to the upside occurs.

This area of consolidation is what forms an order block. Traders can expect price to revisit these blocks in the future, which allow for high probability trade setups to the upside.

Well, yes but not exactly. It's hard to differentiate the two with an exact formula, however, the idea is to specifically look for significant areas where price made an impulse after consolidating to create the zones.

To SMC traders, by specifically mapping out order blocks in this manner you have more high probability zones to place trades with.

The simplest way to understand market structure is by understanding pivots & trends.

A trader who understands market structure knows that a market making higher lows and higher highs is in an uptrend.

Vice versa, a market making lower highs and lower lows is in a downtrend.

You can see in the image above; this all becomes clear.

Markets can be up trending, down trending, and they can also be considered as ranging.

Now, these are just the basics that most traders consider as common sense. Right?

The first term that's used often with market structure besides the basics is 'break of structure' (BOS).

Let's break it down.

A break of structure can be determined when price breaks a previous high or low, indicating the market may form a new high or low.

You can see in this example; when the price broke above the last significant high circled in green, it was considered a 'break of structure' (BOS).

Since we are using the advanced Smart Money Concepts features a part of Lux Algo SR & Patterns Premium, we can also see "strong" breaks of structure too, indicating when smart money is present & that price is more likely to form another significant higher high.

The next part of market structure that's important to know for Smart Money Concepts traders is 'change of character' (COC).

A change of character can be determined when price breaks a significant higher low in an uptrend or a lower high in a downtrend with certain conditions met that indicate the beginning of a reversal, or more simply put, a change of character in the market.

So, in this example, you can see the higher lows circled in green.

Then as price breaks the recent higher low and sweeps liquidity under certain conditions, that point is considered the change of character.

Following the COC, the market transitioned from an uptrend to an aggressive downtrend.

This is a more generalized part of Smart Money Concepts with various use cases for any trader.

The idea is to psychologically find where the average retail trader will place trades, and how to take advantage of these "obvious setups".

Trading is a zero-sum game at the end of the day, so it's useful to know the technical setups where most traders are likely to lose money.

According to SMC traders, the institutional traders are taking advantage of these obvious setups in the market to find more optimal entry points.

You can consider this true during fake-outs and 'stop-loss hunts' which we will demonstrate soon, however, areas of liquidity can actually be much simpler than that.

Equal highs & lows are a great setup for finding good areas of liquidity. It doesn't always have to be so complicated.

While many argue trend lines are useless, you can't deny the fact there are orders being placed based on significant trend lines in the market.

Whether it's retail or institutional traders, these are significant areas of liquidity that can be traded in many ways.

Opposed to just standard 'breakout & retest' entries on trend lines, you could look for retests that are less obvious and that have occurred after taking out lows in the market structure first.

Markets are complex and there are many factors to consider when determining an optimal entry point. Sometimes the obvious entry points work, other times they don't.

A useful thing to consider is the market sentiment as these setups present themselves.

If it seems like everyone is expecting the market to go upwards after the standard breakout & retest... maybe, you should look for a more optimal entry that's less obvious to the average retail trader.

For more complex liquidity, we can consider where retail traders are likely to get taken advantage of during breakouts. Also known as fake-outs, or stop loss hunts.

Here's an example of a scenario where retail traders get trapped.

After a long consolidation period (grey box), price finally breaks down, causing retail traders to get their stop-loss orders triggered below, as well as getting them to expect the market to actually continue downwards.

Although, to a smart money concepts trader, this area (in green) may be considered an area of manipulation before a large move up that the retail traders were originally expecting.

By understanding where liquidity is in the market, we can know when retail traders are likely getting trapped.

An optimal entry point during this manipulation period would have been the liquidity sweep area being tested as support, indicating the market is not likely to continue further down.

So, this was a sign of strength. Many retail traders were trapped during the impulse down, however, it was all a setup to allow for a move higher.

These are the main ways liquidity can be interpreted by a smart money concepts trader.

Some methods being simple & considered as 'retail trading', while others are more complex.

So, after breaking it all down, we can conclude that Smart Money Concepts is an intelligent approach for creating trading plans & finding useful setups.

Incorporating some aspects of this into your technical analysis can not only give you a deeper understanding of market psychology, but also can put you ahead of most retail traders.

Learning all of these methodologies a part of SMC can take a lot of time, however, it's worth the effort to help evolve your trading experience.

Does this deem technical indicators useless?

I would say, not at all.

Incorporating basic parts of smart money concepts & having an understanding of how it works can complement your experience with other technical indicators and help you become a more well-rounded trader or investor.